Saturday was a bit of a strange one. Romania announced new emergency measures: The closure of malls and dentists (except for emergency procedures), a curfew (10pm - 6am), and no gatherings larger than 3 people (not including those who live together). It's only a matter of time until a more severe and all encompassing lockdown is decreed. Romania wouldn't be able to face a hospitalization situation similar to Italy's though in Bucharest they've built two military field hospitals in preparation for a worst-case scenario. My wife said, "imagine there's an earthquake in Bucharest now?" Then it happened in Croatia. Luckily it wasn't massive, but calamities in times like these are that much more calamitous.

Took another off road tour on the hills. It was windy and with the haze in the air  over Cluj provided the dystopian cityscape that angsty American teenagers can only dream of. The shameful amounts of garbage strewn all over fit the bill. Even saw a hovel built within a hillock, with a CCTV camera at the entrance. I don't know if that was the most surprising aspect about that property or that it was for sale. 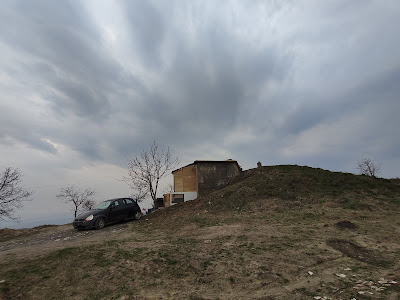 On Sunday they reported the first two Coronavirus deaths in Romania. The first victim was a terminally ill cancer patient, the second person was on dialysis with a chronic kidney condition. Both were seniors. The total number of cases is up to 433 now, meaning cases have tripled over the past week. In Cluj the number of cases jumped from 2 to 15 in the same time frame. Nothing unexpected given the rate of infection. There's a hashtag movement going on in the background, #stauacasa (#imstayinghome) which pits those who are taking it all very seriously against those who, for a variety of reasons (personal liberties, conspiracies, apathy) act like nothing's different and carry on as usual. I also coughed again.