December 21, 2011
Twenty-two years ago today, amid a growing sense of euphoria, Romanians took to the streets to topple the totalitarian Communist government that had stifled the country for nearly fifty years. I remember being swept in that wave of optimism and joy, singing along to anti-communist chants, "Ole, Ole Ole Olee, Ceasusecu, Nu Mai E!". Everybody in the country that year received a priceless Christmas gift: Freedom.


Twenty years on and I only remembered all this because we drove past the cemetery where I noticed a small ceremony taking place. After work, I took a walk to the memorial site and said a prayer at the graves of the innocent people who lost their lives during those tumultuous days. I don't think it's important to discuss whether any of them were, or meant to become, "revolutionary heroes". What's important is that they believed that Romania would be a better country if all its citizens had the liberty to decide what to do with their lives. And for that they lost theirs.

There are still many improvements to be made, but in these twenty plus years Romania has become a place that they could only have dreamt of...so, in their memory, let's be happy for the freedom we now enjoy and let's keep working at it, because they didn't die in vain. 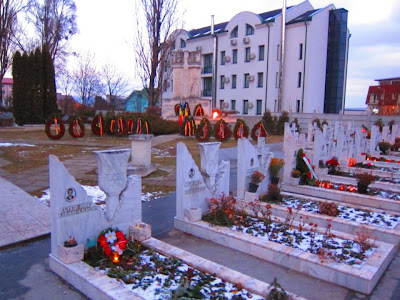